The Center for Eastern Mediterranean Studies (CEMS), heir to the Center for Hellenic Traditions (2004/5–2009/10), promotes the study of the eastern Mediterranean and its hinterlands from antiquity, especially the Hellenistic oikoumenē (323–30 BCE), to the end of the Ottoman period. It aims to create an academic environment for the promotion of a greater understanding of the eastern Mediterranean as a key area of world history, and thus shed new light on the signiﬁcant challenges this region faces at the beginning of the twenty-first century. The center perceives the Mediterranean as an ideal framework for the analysis of interconnections across geographical, chronological, imperial, religious and disciplinary boundaries, focusing on east-west interaction and exchanges, the movement of people, objects and ideas to and from the eastern Mediterranean, as well as imperial (dis)continuities – Roman, Byzantine, Islamic Caliphate, Ottoman – from the ancient to the modern period. 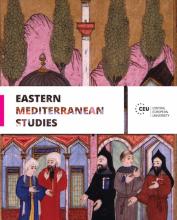